If you ever get the chance to visit the stunning rock formations and monasteries of Meteora, Greece, don’t miss it. Meteora, which literally means “middle of the sky,” “suspended in air,” or “in the heavens” is a region of spectacular monolithic stone pillars in northern Greece.
Occupied by monks since the 14th century, the six gravity-defying Greek Orthodox monasteries of Meteora sit high above the village of Kalambaka, offering a vista of Greek religious history, eye-popping scenery and confounding structural engineering. You’ll find yourself wondering, “How on earth did they do that?” at every turn.  Apparently, God doesn’t require a building permit.

Getting there
There are daily bus connections and trains from Athens, and bus connections to Thessaloniki, Delphi and many other cities in Greece. I recommend using the website Rome2Rio to map out your transportation. If you’re visiting Meteora on the weekend or during high season, it’s smart to book your transportation ahead.
Once you arrive in Kalambaka,  it’s a half day hike to visit all of the monasteries via the trail that connects them, or you can take one of the many half or full day tours offered in Kalambaka. If you’d like to visit the monasteries independently but don’t have time for the full hike, you can hire a taxi in town to drop you at the first or second monastery for 10 euros, and pick just a few monasteries to visit in a couple of hours.
Adventures in Meteora
I arrived in Kalambaka via bus from Athens at 4 PM in the afternoon. I quickly checked in to my hostel and met the wonderful hosts, one of whom offered to drop me at the trailhead so I wouldn’t miss the sunset. My first motorbike ride, and a sunset over Meteora? Yes, please!
George dropped me at the start of the trail and I set off at a quick pace, calculating that I had about 45 minutes until it was dark. The path to the monastery climbed steadily upward, zig-zagging through the trees and following signs for a cross country race. The cobblestone path gave way to dirt, and I began to get views of the spectacular rock formations and valley below. Above, I could see the Monastery of the Holy Trinity perched precariously atop a very tall, pointy rock.
I reached the top just after the sun disappeared, and managed to snap a few photos of the monastery and the valley below. The setting was beautiful, lush green forest interspersed with fall color, with the monastery jutting above and seeming to touch the heavens.

Chasing the sun in Meteora

A quick history lesson
Although monks have been living among Meteora’s caverns and pinnacles since the 11th century, the monasteries were built nearly five hundred years later. Between the 14th and 16th centuries, 21 monasteries were built by Greek Orthodox monks on top of the rocks surrounding Kalambaka.
Until the 1920s, the only way to reach the  monasteries was by climbing a (very tall) ladder, or being hauled up in a large net. Ascending to the monasteries was not for the feint of heart –or faith, since the ropes were only replaced “when the Lord let them break,” or so the story goes. If you died, your bones got placed in the ossuary, a room in the monastery that held the scull and femur bones of all the righteous monks for all eternity.
The six monasteries that still exist are inhabited by monastic communities, four by men and two by women. The largest, called Monastery of Great Meteoron, is recognized as a UNESCO world heritage site.
In the 20th and 21st century, Meteora captured the imaginations of writers, screenwriters and filmmakers. Meteora has been featured in many films, including the 1981 James Bond movie For Your Eyes Only. Meteora was also the inspiration for settings featured in Pokemon, Call of Duty 3, World War Z and The Eyrie of Vale of the House of Arryn from Game of Thrones.

Would you build your secret hideout here?

Meanwhile, back on the trail…
After my sunset hike, I returned to the hostel and met some of the other guests. We made plans to hike in the morning, and everyone turned in by midnight to get some rest.
In the morning, my roommate and I ate spanakopita, a Greek pastry made from spinach and feta cheese. We also visited the local bakeries and fruit stand to pick up some hiking snacks. After cappuccinos, Roee and Rei and I hit the trail for a day of exploring the monasteries on foot.
It was perfect hiking weather, cool and a little bit overcast. The miles went by quickly as we swapped travel stories and ideas for working abroad. Rei has been traveling for over five years, interspersed by stints working abroad, while Roee is a web designer who has just turned freelance and become a digital nomad. Inspiring, right?

Here’s me (in the middle) with my awesome hiking buddies.

We decided to hike around and check out the monasteries from the many awesome viewpoints the trail offered, but only go inside the Monastery of the Grand Meteoron. Along the way, Roee befriended many cats, which seemed to be everywhere and quite well fed.
The heights were dizzying and many viewpoints had no railings or signs. It was adventure hiking at its best. We enjoyed moments of stillness and solitude from each viewpoint, just soaking up the peaceful vibes and gorgeous panoramic vistas. After one moment of total zen, everyone shared their (very different) experiences with meditation. Rei, it turned out, had volunteered at the same meditation retreat in Mexico that my cousin Abi is currently at. You can check out Abi’s awesome travel blog here.

Roee, enjoying the view (and trying not to look down).

Each monastery was unique, perched atop a tall rock and built all the way up to the very edge. Some had single-person sky trams to ferry the monks or their supplies across, although we didn’t get to see one in action. Many had pulleys rigged up to load and unload supplies. It was impressive just thinking about the engineering skills needed to build a monastery in a such an unlikely place!

I wondered whether the many monasteries had been built by splinter factions breaking away, or all founded separately. And did the monks and nuns ever get tired of being cooped up on top of a mountain? Probably. On the way down, we saw three monks exiting a monastery in black robes with flat topped tall black hats. The idealized image was ruined when we noticed they were holding cell phones. Then these modern monks got into a car in the parking lot and the driver pulled off his robe. Apparently even monks need a break sometimes!
We made it back to the hostel just in time. After a quick snack (two chicken gyros), I said goodbye to Meteora and my hiking buddies and hopped on the 5:20 train back to Athens. As the train pulled away from the station, I watched the rocks light up with the setting sun. I wondered if I would ever come back, and realized that I was thankful I had made the effort to visit Meteora during my week in Greece. It was unlike anywhere else I had ever been. 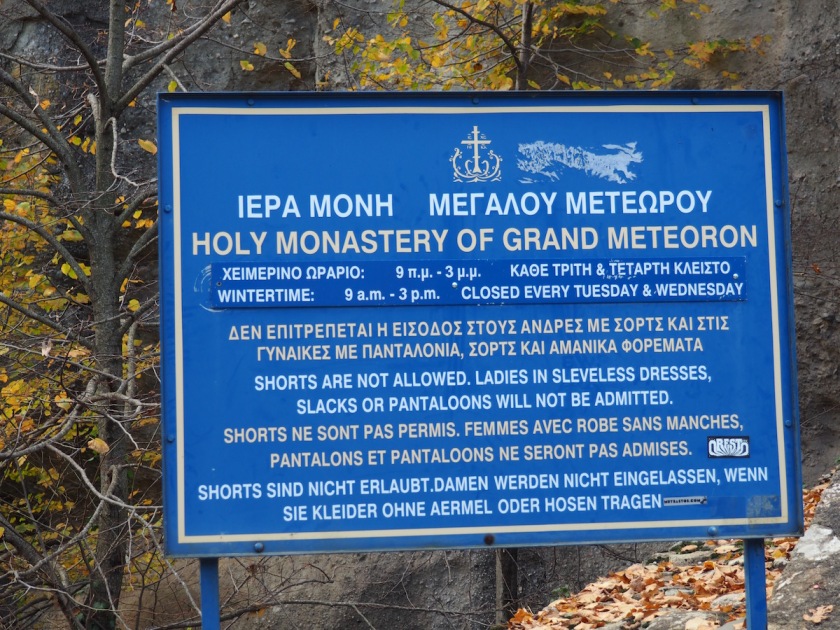 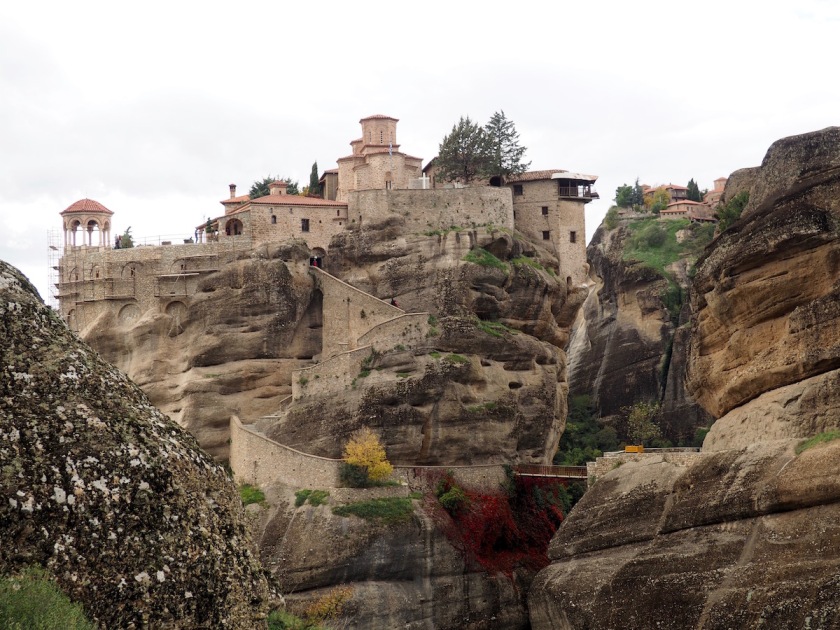