As 2016 came to an end, I hopped from Vietnam to Myanmar (formerly Burma) to explore this incredible country where ancient tradition is just beginning to meet the modern world. Due to an ongoing civil war, much of the country is still off-limits to foreigners, but a bourgeoning tourism industry and recent democratic elections indicate things are changing rapidly.

With cheerful shouts of “Min-ga-la-ba!” (hello) echoing down every street, the friendly and optimistic Burmese people are the true gem of this beautiful country, which sits between Thailand, Laos, China, India and Bangladesh.

Myanmar is a diverse place. The country is home to more than 100 ethnic groups, although almost 98 percent of the population identifies as Buddhist. Indeed, there are nearly 500,000 buddhist monks in Myanmar. Whether you are shopping in a bustling market or visiting a temple, the sight of the monks’ saffron robes is a common one.

Here’s a few of my favorite photographs (and memories) from the twelve days I spent in beautiful Myanamar.

I expected that watching the sunrise over the thousands of ancient temples in Bagan would be good —I just didn’t think it would be this good. Between the hot air balloons, the morning mist, the golden light and the thrill of scouting the perfect temple to post up on before dawn, Bagan exceeds all of the hype and superlatives travelers like myself throw at it. Put this incredible experience on your bucket list; you won’t regret it. 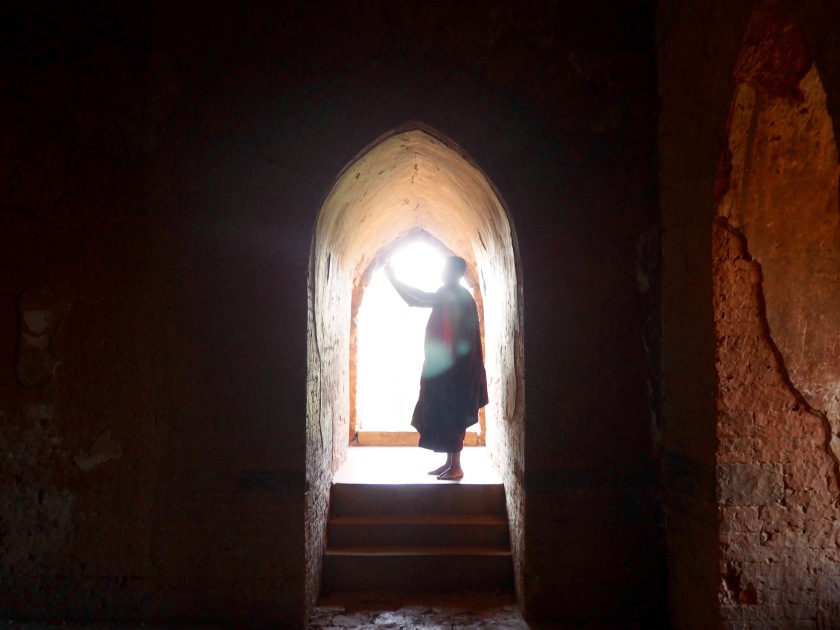 Guess what this novice monk is doing in this temple? Taking a selfie! I love the silhouette of his robes, the sun flare, and the mixing of ancient and modern that this photo captures. It’s very symbolic of where Myanmar is today as a country —cell phones are already ubiquitous, but they were only introduced here in 2013.

High in the mountains near Kalaw, this Burmese family was all smiles as they passed our even slower ox cart (our trekking guide was feeling lazy, so we hopped in a passing wooden ox cart for a very bumpy ride). Apparently, road rage isn’t a thing when you travel by ox power. 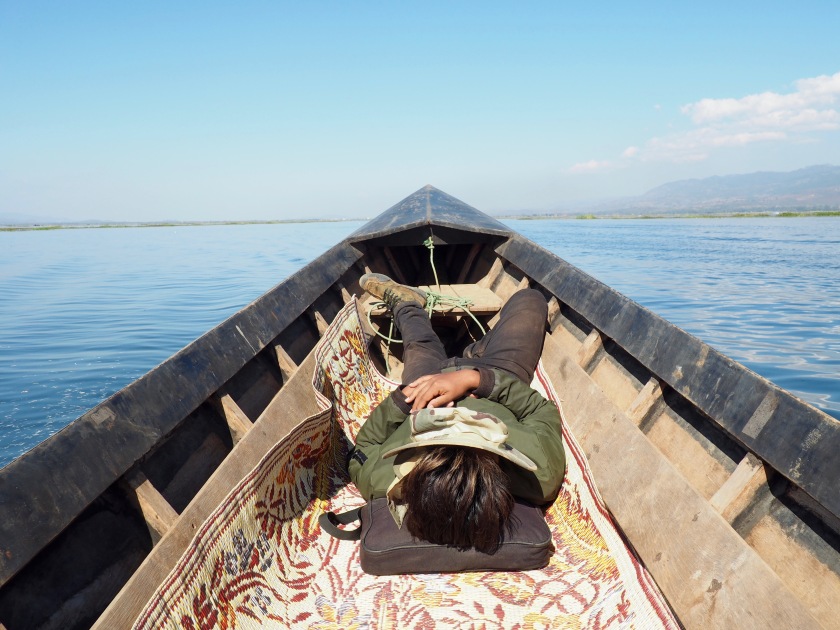 Same trekking guide, different nap. Besides chilling hard, he was pretty good at guitar. This was towards the end of our two-day trek to Inle Lake. 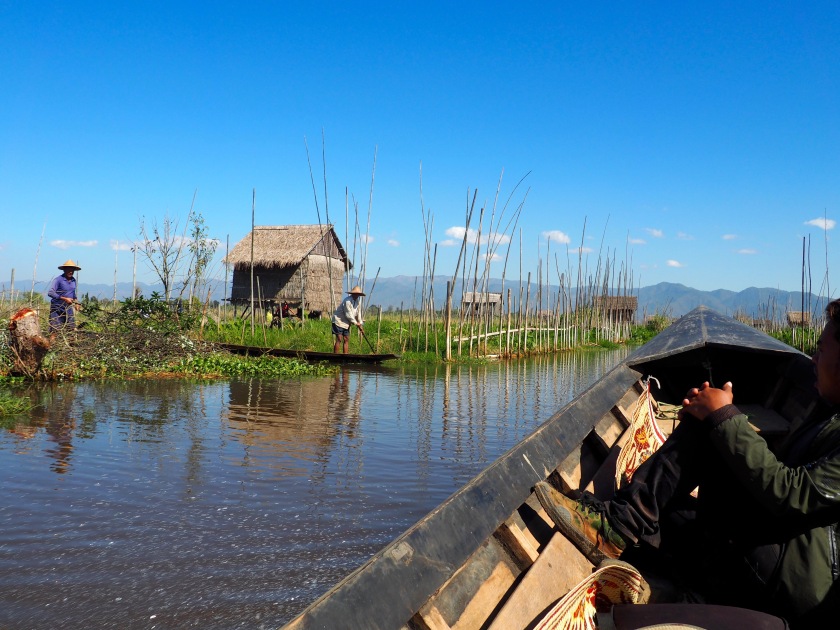 The people of Inle Lake not only live in houses on stilts over the water, they also farm on the water and get around by using canoes instead of walking. It’s sort of like the Venice of Myanmar, only without the annoying gondoliers and stinky canals. 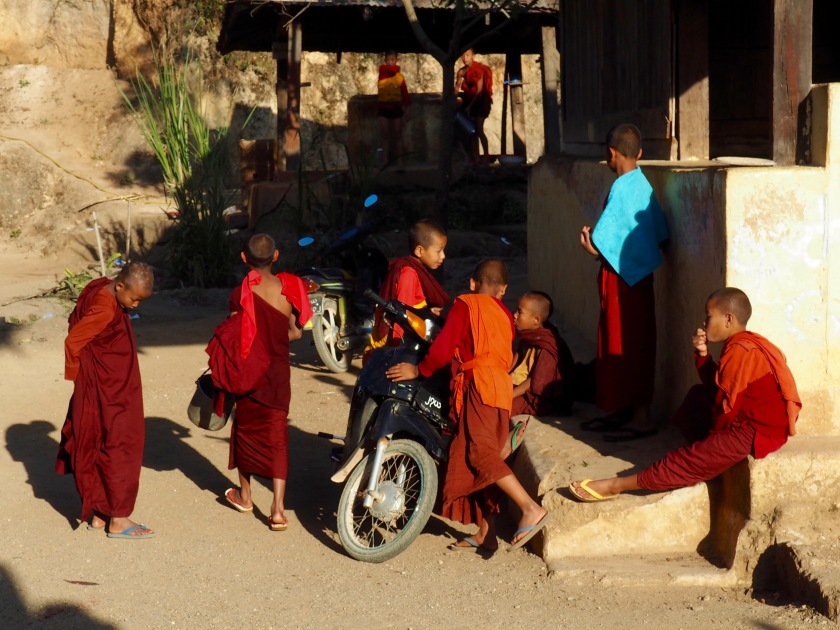 Hanging out with the novice monks was our favorite down-time activity during our trek from Kalaw to Inle Lake. These baby monks couldn’t keep their too-big robes wrapped right, tried to hotwire a motorbike, whipped each other with towels, had a kung fu fight and turned out to be pretty good at frisbee when we challenged them to a game. 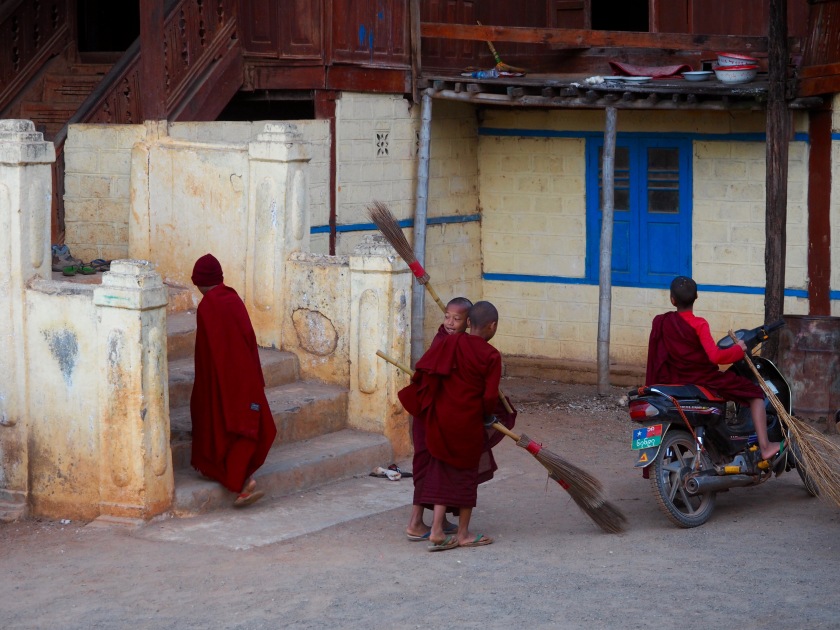 Time for chores…or pretending to be a witch stealing a motorbike, if you are a baby monk.

Watching this young monk feed the kittens from his bowl completely melted my heart. Normally I am not a cat person, but one of those cats slept on top of me and kept me warm despite me having a full on freak out (I was sleeping on the floor and thought it was a rat crawling over me) and trying to kick it across the monastery in the middle of the night. 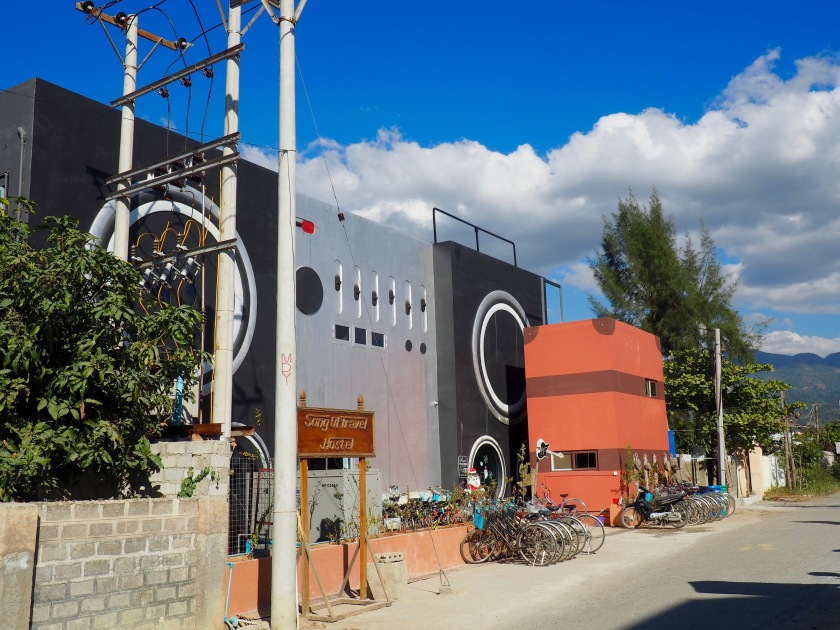 We hiked for two days through the mountains of Myanmar and ended up…at a giant hostel shaped like a boombox next to a power station? Yep, the irony of travel never stops. On the bright side, they had free bicycles and kept the tunes bumping. Thanks, Song of Travel hostel —it was real.

Apparently, being a monk and hanging out in a thousand-year-old teak monastery doesn’t save you from needing to charge your iPad…or watching bad videos on YouTube. Despite getting vibed by that old man in the blue turban, who was annoyed that we interrupted the novice monks’ study session going on inside, I really liked how the round windows framed this shot. Snapped on a hungover bike ride around Inle Lake on New Year’s Day. 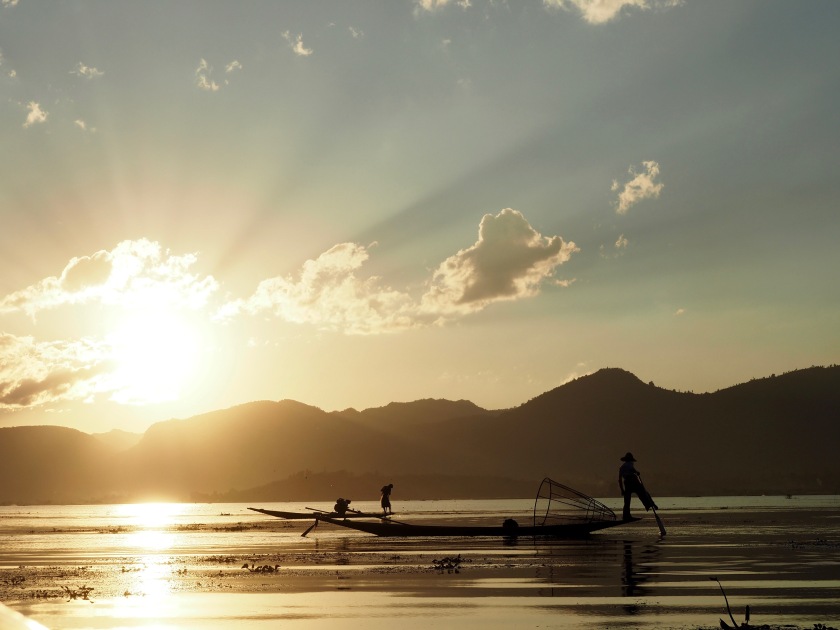 Watching Burmese fishermen on Inle Lake at sundown was one of the highlights of my time in Myanmar. I almost didn’t share this photo, since the guy with the basket in the foreground was just posing for tourists (like me) and trying to get money. Luckily, the guys behind him were the real deal and didn’t care if we took a million photos of their awesome leg rowing, paddle whacking fish-catching technique (I could write a whole post about this, but I’ll spare you the details…let’s just say this is the original SUPing and way more badass).

The view behind the sunset —our taciturn boatman, busy fixing stuff and doing boat things.

Have I mentioned I love boats? In my happy place for sunset on January 1, 2017.

Got a question or a story to share about Myanmar? Post it in the comments below, I’d love to hear from you!