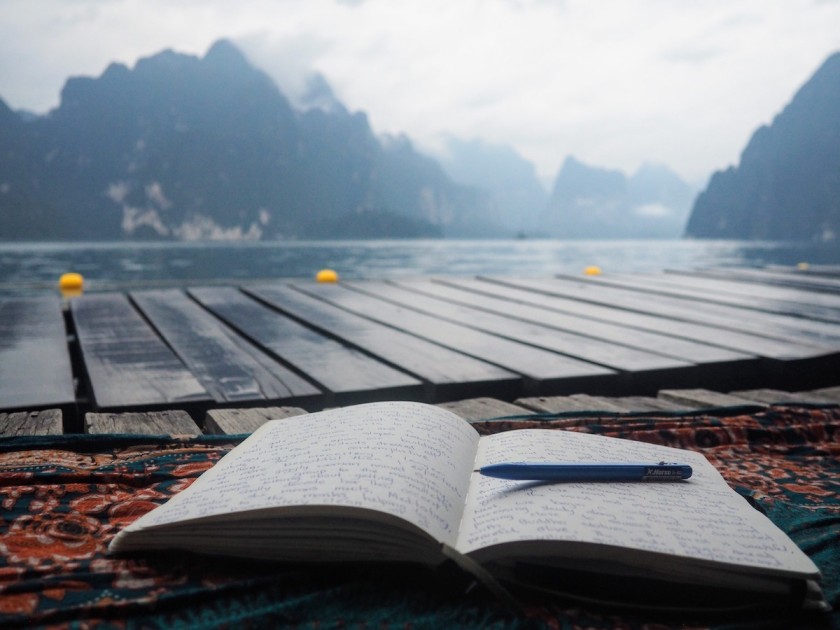 Napkin scribbles, songs, poems and random musings from a trip around the world…

When I travel, I sometimes have one of those disorienting moments where I find myself wondering, ‘what am I doing here?’ Then I remember; the meaning of life is love. There’s no better way to experience love than by opening your heart to the whole world. When you give your heart away to everyone and everything, you will find love wherever you go. —Sri Lanka

It doesn’t matter where you go, only that you leave behind every part of yourself you think you know. —Bangkok, Thailand

The incredible lesson travel taught me was not to cling too tightly to my expectations. Instead, like a rope swing over a river, I let go and took the plunge into happiness. I emptied my backpack of frustration, anxiety, and fear, and learned to travel with an open mind. —Bali

Sometimes the whole point of travel is to end up back in the place where to you started, only to find it has become a whole new world while you were away. —Malaysia

The only way to go is forwards, and the only lesson is to appreciate the magic as it happens. Love ecstatically with every fiber of your being and then let it all go. Don’t try to hold on to anything, because the entire universe is flowing with impermanence, and you are a vital part of it. —Byron Bay, Australia

You are a human being, not a human doing. Find some space to be yourself in this world and don’t get caught up in the doing. —Kathmandu, Nepal

Living life to the fullest is a series of actions. Be decisive. Don’t swerve. — Inle Lake, Myanmar

Start with how you feel. You’ll avoid a lot of misunderstandings that way. —Byron Bay, Australia

It was one of those miraculous, luminous moments in an otherwise unremarkable day of travel, which shines in your memory like a bookmark.  —Sumbawa, Indonesia

I wanted a life that made sense, I thought, conveniently forgetting that life so rarely did.—Kathmandu, Nepal

Perhaps it was the smoking hole in my heart. — Florence, Italy

It felt as if my life was a novel of magical realism. —Indonesia

I wanted a life so filled with love and adventures that I would never want to live it any other way. —Nagarkot, Nepal

Stop waiting for permission to live the life of your dreams. Let go of the idea that you have nothing to contribute to the conversation, or the collective consciousness. Step forward, speak out, leap outside your comfort zone and into the magic. Release your belief that you are less worthy, talented, intelligent, beautiful and interesting than anyone else. Comparison is meaningless and the death of joy. Say yes to the things that challenge you. Say no to things that do not move you forwards. Cultivate a habit of going deeper…in conversation, in writing, in creativity and in your relationships. Embrace the things that make you feel vulnerable. —Shan, Myanmar

Travel is a process of subtraction. Like peeling back the layers of an onion, you reveal yourself by stripping away the bullshit, exchanging fantasy for raw experience, giving up the person you thought you were for a bold stranger who looks the world in the eye without flinching. It is not what you will gain from travel but what you will loose as you shed layer upon layer of the person you once were. You will leave behind possessions you thought you needed, scattering seemingly important things like ashes of a past life in hostels and train stations across the globe, gradually whittling yourself down to one small backpack and the simple courage it takes to pick up and go somewhere you have never been before, over and over and over again. What you have left behind will cease to matter. It is enough to be here now, and experience moment by moment the slow unfurling of the reality you are journeying towards. —Varanasi, India

At dusk, thousands of bats called flying foxes spread over the entire sky, soft dark wings rustling against the first stars. Wanting to join them in their freedom, the girls stripped naked and jumped from the roof of the boat into the salty black sea, while down below the men smoked hand rolled cigarettes, oblivious. That night we slept on thin, dirty mattresses spread across the deck. I lay awake listening to the scuttle of cockroaches, staring up at the milky way and a million brilliant stars that twinkled overhead while the boat rocked gently against its anchor, lulled by a deep, strong current, while the boat (my soul) whispered, let me go, let me go, let me go. —Komodo National Park, Indonesia

She had adventures to go on instead

You would think that travel inspired her to put a pen to paper. Instead, it filled her mind with the emptiness of repeat experiences slightly altered, like flipping through 300 channels of satellite tv and finding nothing to hold her interest. Another hostel, another temple, another market, another bus station. The exact location varied but the formula remained the same.

This was the problem with backpacking the world. She skimmed the surface, a water bug unable to penetrate the murky depths of culture, language and whatever was really going on. Cocooned in a safe network of backpacker havens, she flitted from place to place, searching for meaning and finding none.

Long term travel was a continuous process of defining her purpose. Sometimes the reason why receded very far away indeed, like a tide rushing out to sea. Unlike her Instagram feed, every moment was not wonderful or triumphant or profound.

This was the elusive nature of travel writing. You had to have something to say that mattered to other people, that resonated with their fantasy of what travel was.

In certain moments –usually on a fast-moving bus –somewhere in between a place that had lost its magic and a destination half-dreamed, her purpose became clear in brief flashes of lucid transience.

She was riding the edge of possibility, holding life in a sweat-slicked grip. Travel turned her into the caboose in a wild game of crack-the-whip.

Danger and beauty were more present, out here at the edge. With life happening in technicolor and every moment raw and unfamiliar as a new lover’s touch, it was easy to exist in a state of flow, to keep busy with survival, to constantly stem the seep of blood from old wounds with shiny new friendships that lasted a few days at most, emotions packed safely away, a crumpled yellow tag attached reading ‘Fragile, Handle With Care.”

Sometimes she took out these carefully folded emotions and examined them, holding them up to the light and searching for stains, scrubbing out the flaws, then stretching them across rooftops in unfamiliar cities, hanging them out to dry like laundry in the wind.

Love was something that happened to other people who had nothing better to do. She had adventures to go on instead. —India

Failing in love had hurt more than a thousand goodbyes. Out here in the wide world, life was actually happening around her, second by brilliant second. The carnival of travel was distraction from failed love on an epic scale. She was terrified of what would happen when she stepped off the merry-go-round.

She preferred to keep her arms and legs safely inside, but solo travel was more like riding the trapeze. It put her squarely in the spotlight, whipped her around at high velocity and demanded a performance. Even when she was feeling low, black-hearted and afraid of falling.

When she wanted to crawl back to her old life, pick up the phone and say, ‘I’m terrified of doing this alone, forever,’ something inside whispered, the show must go on. —Sri Lanka

Become what you are

when the further you go,

the better it feels.

just let it all go

sand in the wind.

to strangers after midnight

in the anonymous darkness

of hostels and bus stations

in the unending curve

of the open road

possibility in the lift

of an airplane’s wings

take a chance or ten

is a new beginning

you have all the time

in this forsaken world

to feel lonely, be alone

learn to love the difference

ride the high of solitude

stand outside, looking in

or are you the monkey in the zoo?

become what you are

what you have always been

All writing is mine, please do not steal it 🙂